This summer the house renovations involved large rocks, small rocks, loud machinery, bureaucracy, pissing off the neighbours and dust – lots and lots of dust. A full arc of activity and emotions!

As our time in Italy can only be done in quick snippets during vacations, the big decisions need to be done well in advance. Luckily, we have the advice and wisdom of our indispensable director of operations Ralph Chiodo. We would be lost without him! Ralph has taken us under his wings and made so much of this life changing project happen without tears. Maybe a lot of sweat, dirt, endless hours of discussion and emails – but no tears so far. All hail Ralph!

Our latest adventure involved the upgrading of a driveway and dealing with the crumbling wall attached to it. The wall needed to be pulled down and replaced before the rains of autumn started. The driveway had been neglected for many years when the house was unoccupied and the wall was creating a perilous area next to the kitchen causing drainage issues and safety concerns. 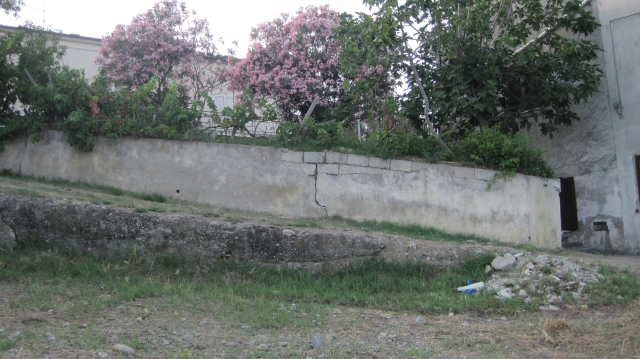 Wall along the driveway before 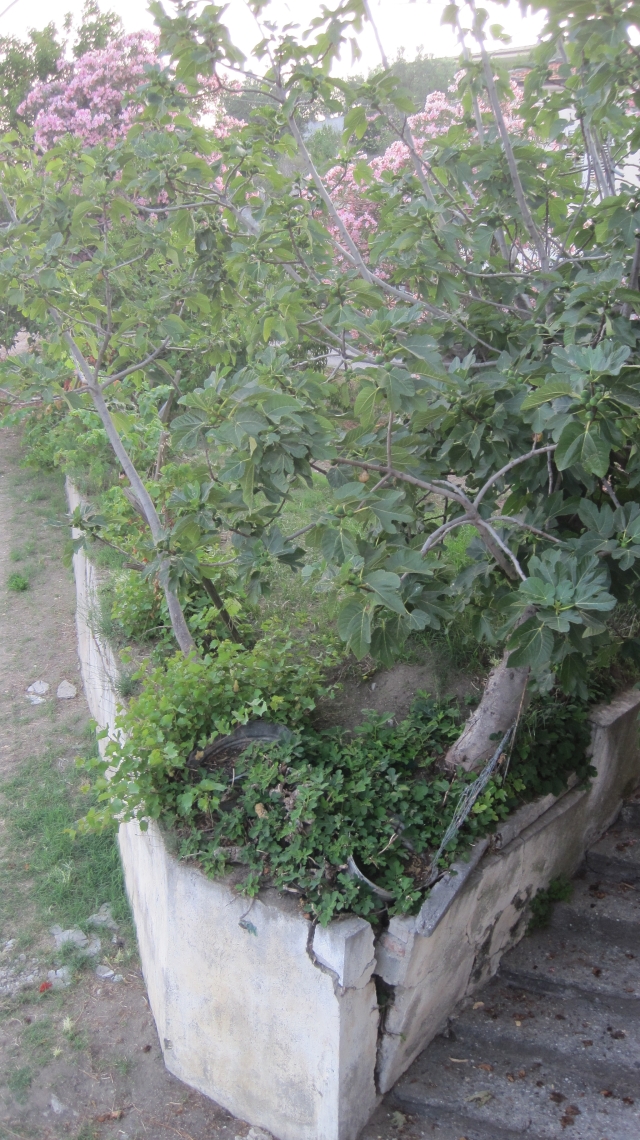 Old wall and driveway view from above

We decided to replace the wall with armour stones (at a few tonnes each) instead of bricks and cement because we love the rustic feel to it and we will eventually plant lavender and other herbs between the boulders, giving us both colour and fragrance.

The first day of activity was incredibly loud. I have never stood beside a back hoe before and when they get all fired up – they make one hell of a racket! No wonder the neighbours gave us evil looks! I think we have decades of apologies coming our way in that regard. 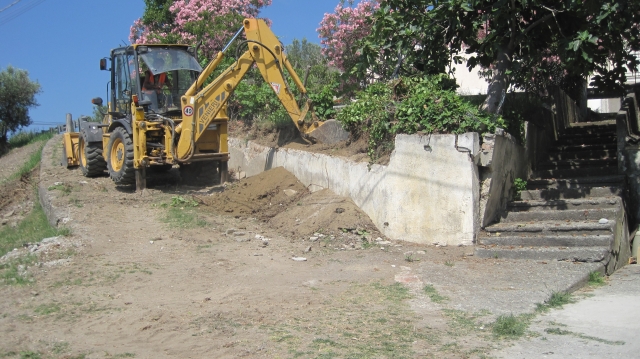 The wall being pulled down – its all very, very quiet!

By mid-morning, the retaining wall and fig trees were pulled down. It is unfortunate that we had to sacrifice a couple of trees however, we are offsetting the loss by planting more olive and fruit trees this autumn. It is also a relief to know that this rainy season, the wall will no longer heave with water threatening to burst at any moment – straight into our kitchen window! It is finally gone from everything except for the photos on my camera. And we are not the least bit sad about it! 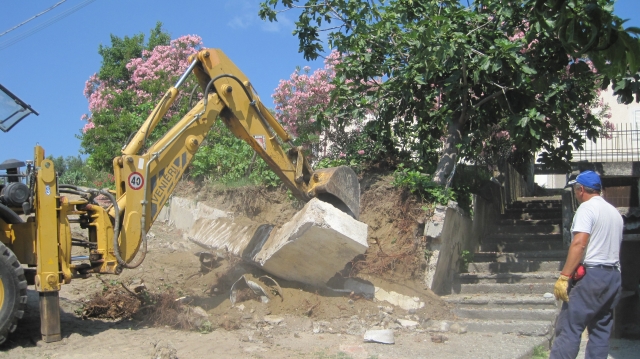 Wall being pulled down 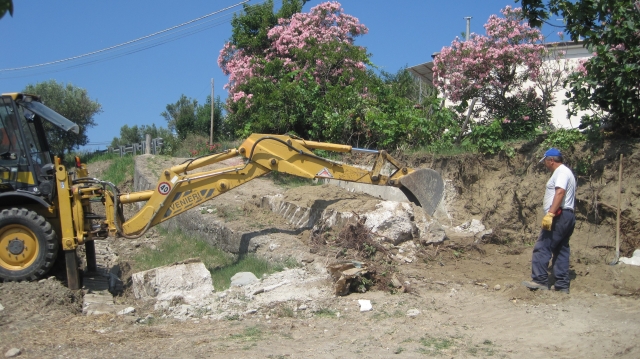 Wall being cleared of remaining trees and dirt

Once the wall came down, then came the gravel and the placement of the boulders. By lunch we were all nicely covered in a layer of dirt that would have made Pigpen of Charlie Brown fame brown with envy! The boulders were arranged with Ralph directing every centimeter. I have to give the back hoe driver credit for his nimble abilities and super sonic hearing over that engine. It was a delicate operation and we all love the final result! 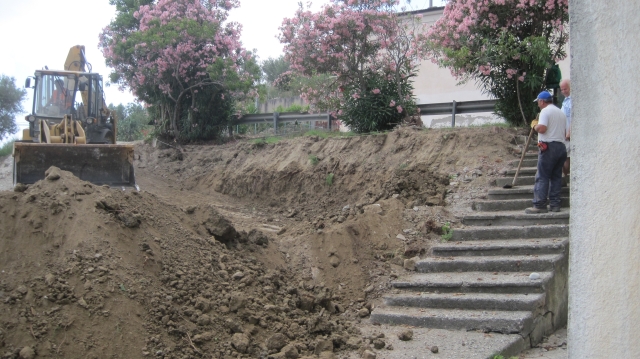 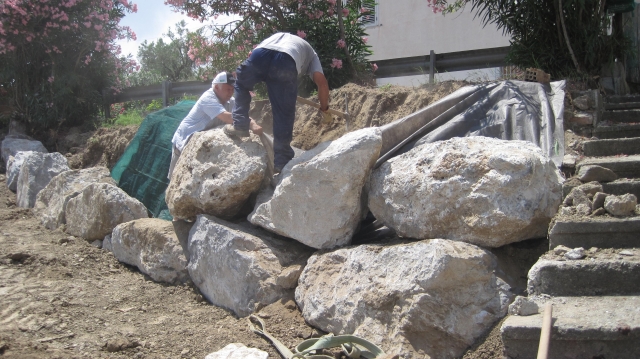 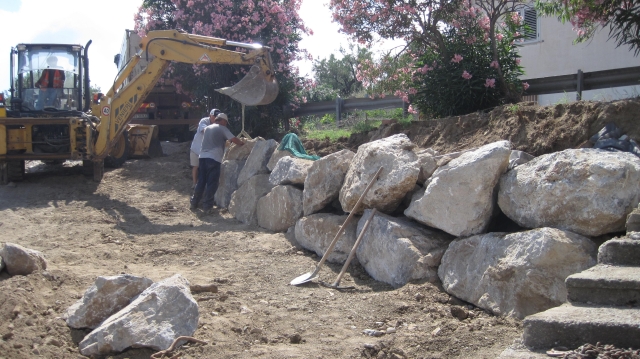 Not so sure the neighbour agrees with it all. Besides the evils looks there was a complaint to our local municipal government about our driveway. Initially it was a bit scary having a series of officials debating in the shade of our Oleander trees several days running. There were lots of hand gestures and shoulder shrugging and speaking at verbal speeds that broke the sound barrier.  It was such rapid verbal staccato I think I understood only when they stopped long enough to inhale. My sister is much better at “excited” level Italian.  Everything was settled after a series of phone calls on our behalf as well as emails and the relief of us having all the required permits. We now have a friendly relationship with all the official car driving folks. Being Canadian and foreigners it is Ralph-approved wisdom to make sure all the paperwork is on hand and in triplicate just in case. This noisy enterprise will no doubt be the subject of discussion at the Bar Centrale when the topic is the foreign Amazons. 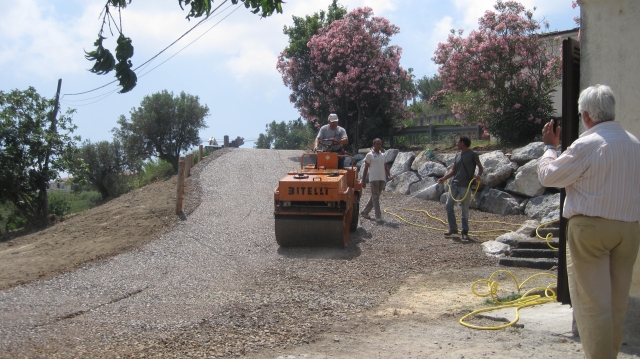 smoothing things out both literally and metaphorically

Life is a driveway. It’s filled with noise, hand waiving, dirt, giving directions, taking directions, gossip for the neighbours and change whether you like it or not. Personally, we think it is fabulous!

Cheers to a job well done! 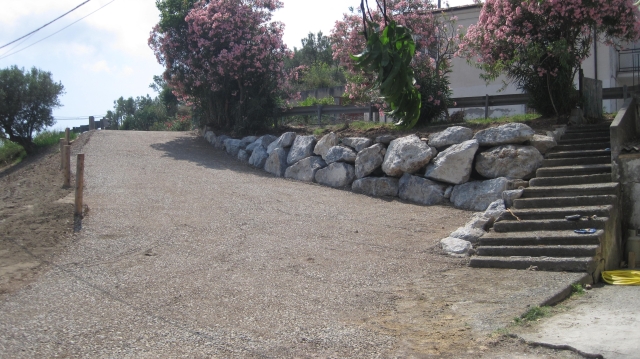 Our new wall and driveway! 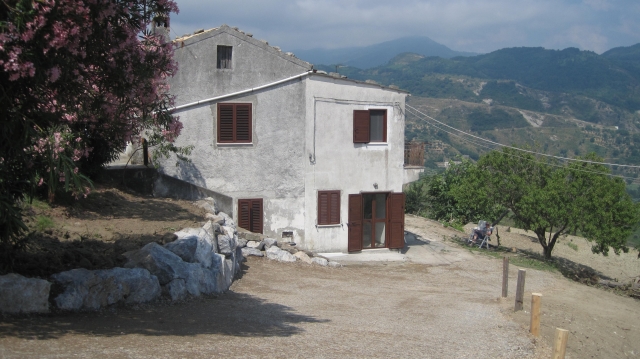 View from the top of the new driveway!

7 comments on “Italian update: Life is a driveway”